Welcome to my first movie review in which I encourage a conversation about a recent release, human consciousness, and social justice transformation. I’ll also offer you links to some intriguing articles, individuals, and organizations, so let’s get started with…

First I must admit to being captivated by Jennifer Lawrence’s brooding portrayal of the truth-delivering revolutionary Katniss Everdeen. I’m also compelled by the many similarities Katniss shares with the ancient Goddess Artemis, (seen below with her bow and arrow, ready to protect prepubescent girls,) but I’ve also enjoyed the series for its value as an all-out socio-political show stopper. Mockingjay is the third release in the Hunger Games series which takes the current trend of increasing income disparity to hairraisingly-futuristic-though-not-entirely-out-of-the-realm-of

-possibilities-extremes, and if that’s not

enough for you, the stylists are amazing and the wigs, in particular, have raised the bar of expectation. (I know I digress, but have you seen those wigs?!!)

Yes, the plot is stuck in the old ‘revolution instead of evolution’ paradigm, but it certainly reflects the spirit of our times which, according to archetypal astrologist Richard Tarnas, reflects our current collective planetary influences.

(Astrology? Wait, oh, skeptic! Before you quit reading, I challenge you to a natal reading by Anita Doyle of IntegralBeing.org. I predict she will have your full attention in less than 5 minutes and will leave you sitting in your room with your mouth agog for at least that long at the close of your session. Though your cynicism may be shaken, your path will be clear.)

Now, where were we? Oh, yes. What is archetypal astrology exactly? Archai: the Journal of Archetypal Astrology tells us that this new discipline “…combines an understanding of archetypal principles drawn from the depth psychology of C. G. Jung, James Hillman, and Stanislav Grof with techniques and interpretive methodologies drawn from astrology, in both its ancient and modern forms.” When this combined wisdom is applied to an analysis of human history, interesting and useful patterns of correlation are revealed. (For more general information on archetypal astrology, see the links below.)

Tarnas’ historical research reveals that the Uranus-Pluto Square (2007 – 2020) that we are now experiencing was also in effect, for example, during the turbulent times of the 1960s and early 70s as well as the years around the French Revolution. Consider the descriptors offered by Grice, Maxwell and Streett in Archai. The archetypal principle of Uranus (pictured above) “possesses an electrifying, stimulating, and awakening quality” that supports revolution, the counterculture, and the avant-garde. (Hey! Maybe those wigs are relevant!) It’s also a principal of “sudden, unexpected change” and the muse of technological innovation.

The Plutonic principle, for its part, possesses a “compulsive, desperate, and relentless quality” that awakens latent instincts and drives the depths of the underworld to the surface.” It’s associated with “power drives,” “titanic shifts,” and “radical restructuring.” When Uranus and Pluto are squared, they have a mutually stimulating effect that is expressed through a significant percentage of human beings as a tendency to take greater risks “to bring forth a new world.” (Pluto System pictured left.)

While that may certainly sound familiar, Tarnas and others believe that these planetary forces are not the only ones that have fueled this millennium’s historic wave of protests, for its kickoff has been unusually rife with alignments of great significance that have already passed, (though we’re still reeling from and building on their effects.) For example, we experienced a Saturn-Uranus Opposition from 2007 to 2012, an alignment characterized by “sudden breaks in structures of all kinds.” Tarnas, who is fond of art and music references adds, “…as if to symbolically herald the transit, the beginning of this latest alignment between Saturn and

Uranus was accompanied by the unveiling, on October 9th, 2007, of Doris Salcedo’s Shibboleth art installation at the Tate Modern in London, featuring a large crack or chasm running through the floor of the building….” (See photo at left.) He then explains that this mold-breaking Saturn-Uranus pairing has also been historically associated with “economic and political instability and reform, as in the Black Monday financial crash of October 1987 occurring under a Saturn-Uranus conjunction.”

Interesting, but how is this information useful? In Tarnas’ eloquent words, “…the very knowledge of the powerful archetypal dynamics involved – the foreknowledge of the planetary alignments, their timing, and their potential significance – could provide us with an important further level of insight and self-awareness by which we might better navigate this critical transition in our world history.” If this topic intrigues you or if you need more proof of its value, please see the links below and you’ll be up to your ears in historical references, astrology-speak, Occupy charts and whatnot.

For now, though, I’d like us to consider that we have roughly 5 more years to take advantage of the window of opportunity known as the Uranus-Pluto Square. This means that our signatures on petitions, our participation in peaceful protests, our engaging sociopolitical conversation, our activist art, and our subtle activism is more important than ever.

I’ll get to the subtle activism shortly, but first, let’s consider the more obvious method of public protest. How are we, those concerned about fairness and equality, performing in this capacity? A realistic article from USA Today entitled “2014 protests: From Ferguson to Hong Kong, impact unclear” looks at “the chances that 2014’s protest movements will bear fruit.” It quotes a University of Denver study’s findings that the most important factor leading to protest movement success is, not surprisingly, non-violence. While it’s no guarantee, “53% of the non-violent movements succeeded between 1900 and 2006 – including Martin Luther King’s in the South and Ghandi’s in India – compared with only 26% of those that were violent.”

Most protest movements tend to have what political scientist Erica Chenoweth calls “a violent flank.” Questions, then, are raised as to how to “contain and isolate” violent flanks and whether the protest violence issue is worsening or improving. The first crucial question of keeping protests peaceful requires a separate post. Regarding the second question, however, the USA Today article reported some good 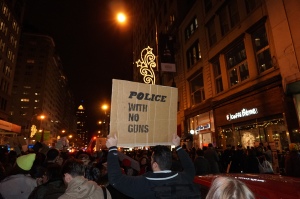 news regarding one movement at least. It stated, “This year’s U.S. protests against police killings get high marks.” Really? Compared to what? Well, for example, the looting that occurred in Ferguson and Berkeley this past year actually “pales” compared to the damage and fatalities associated with the Rodney King riots in Los Angeles in 1992 in which “more than 50 people died and more than $1 billion in property was destroyed.” Well, that’s definitely an improvement, and if the “We can’t breathe” movement results in police officers being trained to engage suspects with less combative methods, that will be a well-earned step in the right direction. To support this outcome, click here: PROP.

Now here’s the bad news. This same article reports that while mobile apps have been extremely effective at getting people to assemble and march, they haven’t been great at getting people to “follow up,” a crucial task that University of Michigan activism expert Christian Davenport defines as “lobbying, reading legislative drafts, monitoring a law after it’s been passed, sitting through a legal proceeding.” This is a big niche that needs to be filled, but one that requires a level of participation that most of us can’t make time for, not if we want to pay our bills, pursue our interests, have meaningful relationships, and relax and be entertained on occasion. Which brings me back to the Hunger Games. Have you seen this not-so-relaxing entertainment offering? Do you think I’m wasting my time being captivated by a “hawt” heroine and haute couture wigs? Or have you found the film to be inspiring, as I have? What are your thoughts? Talk to me!

If you haven’t seen the film, the Hunger Games are a form of entertainment designed to instill crippling levels of fear in the poor. They’re also a way to maintain a vast sense of separation between the classes. Katniss Everdeen, however, proves to be a problematic game piece. The “games,” which are held in a holographically-created arena, are the far-fetched part of the plot. Katniss’ home in a mining concentration camp that provides coal for the Capital, however, is more disconcerting. Given our declining natural resources and the economic collapse that could result from increasing extreme weather catastrophes, (not to mention the religious extremism that is rampant both here and abroad,) this setting reminds me of the horrible truth that our sociopolitical situation could get much worse. In this sense, the Hunger Games are a theatrical escape that brings me back to the present moment, or rather to our historical moment in human history. The series inspires me to take the time to support courageous leaders like Elizabeth Warren, (who needs our help today regarding the Volcker Rule, by the way,) but it also inspires me to create art as activism and to continue my deep inner process work.

I believe that inner process work relieves conflict in our collective unconscious, and in this sense, it’s a powerful form of subtle activism. It also births new beings, and new beings create new worlds. By “new being” I’m referring to the emergence, (through the integration of fragments of consciousness,) of the whole being that is more than the sum of its parts. I have felt my new being, my wholeness, only recently, (after years of committed work,) looking out through my eyes in nascent wonder with an unfamiliar blend of innocence and power – unfamiliar because it is free of personal story and age-old social constructs. It’s a more surprising, liberating, and inspiring state than I could have ever imagined, but it’s so new that’s all I can report so far. How’s that for a testimonial?!

I will close with one more link and one more photo, tributes to art as activism. Voice Project is an organization devoted to the promotion and defense of this powerful combination of interests. The link I’ve provided features a videoed speech by Ursula Le Guinn that will have you cheering, (and writing if you’re a writer.) The image that I have featured below, entitled “Forgiveness Is Divine,” was just created by Hoshi Hana “who makes artwork designed to promote friendship and peace.” She’s also my dear friend, art collaborator, and long-time VAI enthusiast. VAI is the technique that I use for deep inner process work, and Hoshi Hana’s image emerged from the last process that we did together. Thank you, Hoshi Hana! Enjoy everyone! And please, if you have thoughts… leave comments. Talk to me! 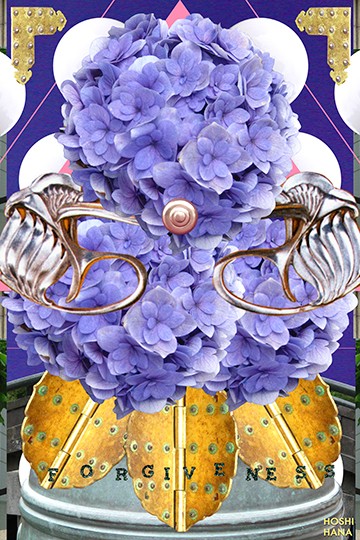 For an excellent explanation of the concepts involved in archetypal astrology, click here.

For “An Introduction to Archetypal Astrological Analysis” by Richard Tarnas, Ph.D., click here.

For information on the history of archetypal astrology, read The Birth of a New Discipline by Keiron le Grice.

The Occupy photo was taken by me on that incredible day that the Teamster’s showed up at Frank Ogawa Plaza. It and the text of this article are both published under a Creative Commons 4.0 license. The last art image, “Forgiveness Is Divine,” was donated by Hoshi Hana and is protected under a standard copyright. All other photos are published under Creative Commons, authors are as follows: